This post may contain affiliate links which means I may receive commissions if you choose to purchase through this link (at no extra cost to you).

It’s like a party in your mouth with every bite! I know you will love these Tiktok cinnamon rolls, but be sure to check out these Bacon Cinnamon Rolls and Air Fryer Pillsbury Cinnamon Rolls!

You can certainly use the icing that comes in the can or make your own icing but if you love the decadence of cream cheese, that is the way to go! You can also make Cream Cheese Frosting without Butter!

A few other great breakfast side dishes to consider are Air Fryer Hash Browns or Air Fryer Toast.

Now, you might be wondering what the deal is with the heavy cream. Trust us, it’s a game-changer.

The heavy cream adds a level of decadence that takes these rolls to the next level of deliciousness. We all need little extra indulgence I say! Tiktok cinnamon rolls are self care.

The best part about this recipe? It’s super easy to make. Pop open a can of Pillsbury cinnamon rolls and top with some heavy cream.

Pour that creamy goodness over the top, bake and boom! Incredible cinnamon rolls!

This recipe has been all the rage on TikTok as a go-to cinnamon roll hack for those wondering how to make canned cinnamon rolls better.

Not only is it super easy to make, but it also results in a truly mouth-watering dessert that is sure to impress. Enjoy these as breakfast, an afternoon treat, or as dessert and garner adoration from the foodies in your life.

This cinnamon roll recipe works with homemade cinnamon rolls and most any brand of the canned version including Pillsbury, Cinnabon, Grand’s, Rhodes and Immaculate Baking Co.

Why this recipe works

Preheat oven according to the instructions on canned Pillsbury cinnamon roll package (or other homemade or canned cinnamon rolls of choice). 400° F (or 375° F for a nonstick pan).

Place cinnamon in a baking dish and pour the heavy cream over the cinnamon rolls (evenly coat each one).

Bake Tiktok cinnamon rolls according to package instructions (approx. 13–17 minutes), until they are golden brown.

How to store leftover cinnamon rolls?

Leftover Tiktok cinnamon rolls can be stored in an airtight container in the refrigerator for up to a week.

To reheat refrigerated cinnamon rolls, I like to pop them in the oven or air fryer for a few minutes (350°F).

You can also microwave individual cinnamon rolls for about 30 seconds!

Can I freeze leftover cinnamon rolls?

Yes, leftover cinnamon rolls can be frozen for up to 2 months. To freeze them, wrap the rolls tightly in plastic wrap and place them in a resealable plastic bag.

To reheat frozen Tiktok cinnamon rolls, thaw them in the refrigerator overnight and microwave or bake them in the oven or air fryer (350°F) until they are heated through.

What can I serve with the cinnamon rolls?

How can I best enjoy these decadent delights, let me count the ways. Enjoy cinnamon rolls with a warm and toasty Cardamom Latte or cold brew with Pumpkin Cold Foam.

I love a carbohydrate with another side of carbs so I say Air Fryer Hash Browns are also the way!

Can I use a different type of cream in the Tiktok cinnamon roll recipe?

You can use half-and-half or whole milk in this recipe but based on my recipe testing, heavy cream works best.

Can I make the dough from scratch instead of using Pillsbury cinnamon rolls?

Absolutely! You can make homemade cinnamon rolls and use this same recipe for perfect results.

Can I add any additional ingredients to the recipe?

Variety is the spice of life! Fun additional ingredients you can add are chopped nuts (pecans and walnuts are yummy), perhaps some chocolate chips or even a splash of bourbon mixed into the heavy cream!

You can also comment below. I LOVE hearing from you! If you loved the recipe, a 5 STAR RATING is the ultimate compliment as food is my love language! 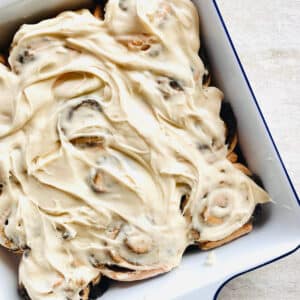 My name is Aubrey. I am a busy lawyer and momma. While I am passionate about both, I have a place in my heart for great food and want to share it with other food lovers!

My name is Aubrey. I am a busy lawyer and momma. While I am passionate about both, I have a place in my heart for great food and want to share it with other food lovers! And for some more super top-secret fun facts....